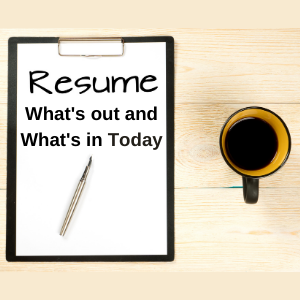 Five Resume Elements That Should Be Forgotten

Resumes have changed a lot over the last 15 years. They’ve morphed from boring employment histories to compelling marketing documents designed to sell you — the candidate — to recruiters and employers. While some basic components like professional experience and education remain, there are other elements that make your resume and, by default, you look dated.

Although objective statements have been passé for years, I still see them on resumes. One reason they fell out of fashion is that they were all basically the same. Every candidate was looking for a great company, where they worked with awesome colleagues, and had room to grow. Boring. Worse, objective statements didn’t address what every employer wants to know “WIIFM?” (what’s in it for me?). Scrap the objective statement and replace it with a summary that demonstrates your value.

Yes, of course, you have references and will provide them if asked. But “references available on request” has gone the way of the objective statement. It’s a waste of space that would better be used by including something that shows recruiters and employers why they should contact you for an interview.

While Times New Roman was once the standard font for newspapers, books, letters and resumes, that’s no longer the case. Yes, some books and newspapers still use it. Resumes do not.

One reason is that serif fonts like Times New Roman (which have small lines that tail from the letters) are not as easy to read, particularly on computers, which is how most people read resumes. To create a modern, easy-to-read resume, choose a sans serif font like Calibri or Arial. Serif fonts like Times New Roman or Georgia can be used for headings to add interest.

One other thing to remember: If your resume is running over two pages, cut content rather than using a font too tiny to read.

As mentioned, resumes used to be considered employment histories that included every position you held and everything you did there. Not any longer.

Today’s resumes are marketing documents designed to pique the interest of recruiters and employers so that they will contact you for an interview. The point is not to tell your entire career story.

Instead, go back 10 to 15 years in detail. Think of your resume like a funnel with each position getting a little less space. Provide a brief position overview followed by three to five or so bullets that highlight your achievements. These are things that have had a positive impact on the employer.

Older positions can be listed in an “Earlier Career” section with titles and companies. No employment dates needed.

While strong resume content is essential, the format is the first thing readers notice. Nix outdated elements like objective statements and serif fonts like Times New Roman. Instead, create a modern, achievement-based resume that will make recruiters and employers want to contact you.

This article originally appeared on Forbes.com, via Forbes Coaches Council