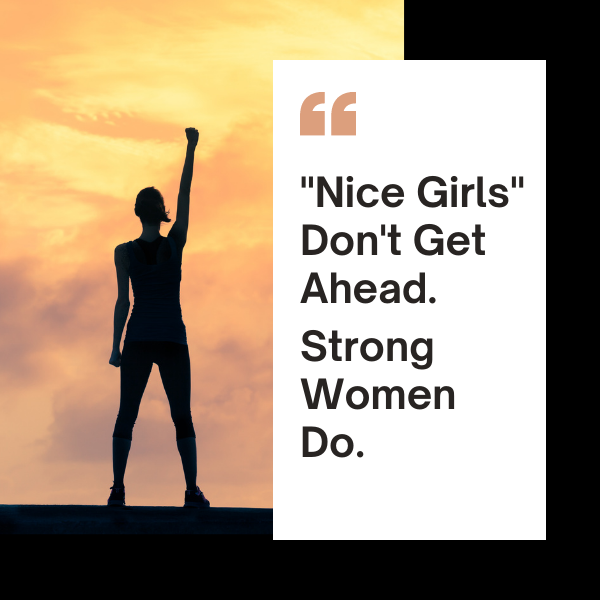 “Nice Girls” Don’t Get Ahead. Strong Women Do.

Although I started my resume writing business in 2014, I’ve been in the career field over 2 decades. Over the years, I’ve read a lot of business books. Some books provide practical advice. Some provide inspiration. A few provide both.

I saw myself on many of the pages. Besides practical advice the book is peppered with stories from Frankel’s coaching practice which provide real-life lessons.

As the title suggests, the book is set up as series of mistakes to avoid followed by coaching tips that can be implemented immediately. When I was offered the opportunity to interview Dr. Frankel, I jumped at the chance.

While the book was published in 2014, women are still reading and recommending it on amazon in 2021. Dr. Frankel consistently posts videos on LinkedIn that are packed with actionable advice.

Following is my interview with Dr. Frankel which originally appeared on career intelligence in 2014.

The most promising would be that there has been some movement.  At least we didn’t go backward.  What’s most disappointing is that this movement is at glacial speed.  After 50 years of Civil Rights legislation, we really should be further along.

I will consider it real progress when women aren’t represented equally in the executive ranks and among elected officials but rather when they exceed the number of men.  Then we will know as a society we’ve become gender blind.

The premise that women shouldn’t try to be more like men, but should learn to behave like women not girls is a recurring theme in your book. Can you expand on that a little for our readers?

When adult women behave according to the messages they received in childhood about what was appropriate for little girls, then they are acting like “nice girls.”  Nice is certainly necessary for success, but it’s not sufficient.

These societal influences can counteract Mom and Dad’s best efforts to bolster self-esteem in their daughters.  It’s a lifetime struggle to act like an adult in the face of a society that prefers women act less than equal to men.

In your book, you note that you left Mistake #3 Assuming the Rules, Boundaries, and Strategies Are the Same for Everyone out of your first book because you were concerned about how it would be received. Are there any other topics you included in this book that were left out of the first book for the same reason?

No, there weren’t any other mistakes I left out because I was concerned about how readers would receive them.  The new mistakes are primarily ones that, frankly, never occurred to me during the first writing, weren’t on the radar screen back then, or that were suggested to me be women I’ve encountered over the past ten years.

Loved that the book is set up as mistakes to avoid, but it’s a bit unusual. Why did you choose that format?

As an executive coach, I write action plans for clients.  Each plan includes the behaviors they want to work on and suggestions for how to achieve them.  My philosophy is that if you knew better, you’d do better, so my role is to illuminate alternative behaviors.

When I was outlining the book, it just came naturally to do so in the same format I used to help clients develop new skills and behaviors.  I wanted to help women to coach themselves to success.

What do you hope that women will take away from this new book? Is that different from your aspirations for the first book?

My aspirations for this book are similar to those I had for the original version, but on steroids.  After having the book be so well-received around the world, I wanted to inject a sense of urgency about women taking charge of their careers and their lives.

I want women to walk away from the book saying, “Now I know how I’m holding myself back and what I must do to move forward with courage and confidence.”

What would you tell your younger self?

I would tell my younger self the same thing the maid Aibileen Clark in the movie The Help (portrayed by Viola Davis) told the little girl, “You is kind.  You is smart.  You is important.”

This interview was originally published in March 2014 on career-intelligence. Nice Girls Still Don’t Get the Corner Office now available in Paperback and on Kindle.