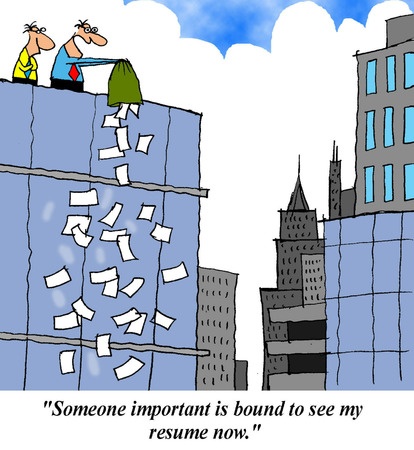 During your career your resume is one of your most important marketing tools. It’s  often the first time recruiters and hiring managers meet you. While some may overlook a typo or two there are some mistakes that you cannot recover from.

A recent article on “Interview Bloopers” was so popular I decided to follow it up with one on resumes.  With this in mind, I asked recruiters and hiring managers to send me some “Resume Bloopers” things that made them stop and say “I can’t believe that he or she put that on a resume!”

These are listed in what I consider bad to worse to bizarre.

I’m in the construction industry. I’m always surprised to receive a resume with a headshot. To add to the blooper, an individual will often include: Divorced – 2 Adult Children – 1 Dog – Healthy Non-Smoker! This type of resume makes a recruiter cringe. It makes the company even more vulnerable to discrimination claims.

—Submitted by Revee While, Director of Marketing, Primaris

Some candidates list their mom and other siblings as references (sometimes even people in their 30s or older do this) or provide an entire life story… literally “I was born on cold morning in Ohio on Friday, January blah, blah, blah…” Then there are things that make you shake your head like this under Interests: “The Beach” (really, the beach is your interest… OK)

What Where They Thinking?

I recently had a prospective candidate send me two resume attachments with completely different work experience delineated on each resume. It was clearly a mistake but was so laughable because the academic credentials, time frames of employment, work titles, and skill sets were completely in-congruent between the two resumes. One resume indicated the candidate was a computer technology wizard with extensive certification and the other showcased someone who worked in retail as a cashier at a local pet store.

The craziest thing we’ve seen on a resume as an applicant who listed being “Number 1” in a beer drinking competition. Another incredible resume addition was an applicant who included winning his Fantasy Football league as a major accomplishment under his achievements section. We had to advise both of these applicants to remove this information from their resumes.

A candidate responded to a job posting with what seemed to be a Dear John letter intended for her boyfriend instead of her résumé. While the heading of her information clearly stated “Résumé”, she had submitted an in-depth explanation of why her boyfriend no longer met her qualifications. She listed everything from failing to care for his child to his ongoing drug problem.

A job candidate listed on his resume six months of community service, which turned out to actually be time served in prison

I once had a girl apply for a position I had open with the email handle SkankyDancer@. She was currently a Stripper and Janitor at a strip club. Prior to that she was fired from Dominoes Pizza-yes it was spelled Dominoes instead of Domino’s-for hitting a pedestrian with her car. In her free time she was writing a science fiction “novvell.”

At this point it was clear to me she had a knack for grammar and spelling. At the end of her resume she stated she wanted to disclose that she was currently on probation for indecent exposure. She was caught urinating in public. As you can imagine she was everything I hoped for in a Websphere Administrator!

Common bloopers are often dismissed, but one real doozy recently came from a .net developer who applied to a position we were trying to fill for a high-end client. The last bullet of each stop on his resume was: ‘Reasons For Leaving.’ One reason was: ‘The people there did not treat me very well.’ Another was: ‘My commute was atrocious, so I told them I couldn’t work there anymore.’ My favorite was: ‘Conflict with team member.’ I can’t imagine the story behind that one. For the record, we passed on that candidate.

This reads like a joke but I can personally attest to the fact that it’s actually a true story.I don’t know if this is a resume mistake or a cover letter mistake, or just the most bizarre job hunting strategy I’ve ever encountered. It came from a man who’d heard about an opening for a marketing and PR person at a local charity and decided to demonstrate his expertise at grabbing people’s attention.

Then apparently thinking he was clever enough to avoid creating a problem message; the next letter added two words rather than one. It read: “John Smith Is Going to Blow You Away!” which is when the police showed up at his door. Before he had the chance to send out the next letter with his resume
that explained just how his expertise was in fact going to blow everyone away.

—Submitted by Barry Maher, Consultant/Author Filling the Glass: The Skeptic’s Guide to Positive Thinking in Business