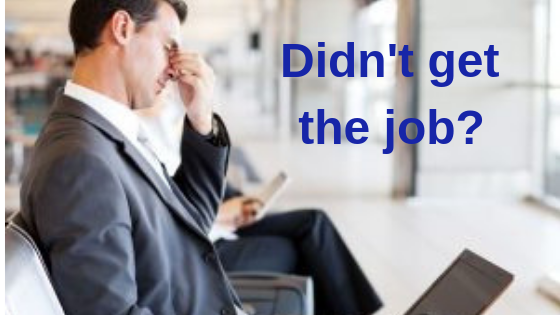 What To Do When You Don’t Get The Job

It’s always disappointing when you don’t get the job. It can be devastating when it was your “dream job” and you were one of the final two.

But, the fact is that there are at dozens of people applying for every position and only one of them gets hired.

If you’re not the one hired it’s OK to be upset. It’s OK to get angry. It’s even OK to cry if you want to. I’ve cried after finding out I came in number 2.

Give yourself permission and time to grieve. Then move forward. Here are a few steps to take.

Even if you’re not hired several people have given their time to you. This is especially true if you’ve gone through several rounds of interviews. Once you’re over your anger, take the time to say thank you to each of them.

This may be done in a brief email or even a hand-written note. Explain that while you are disappointed you appreciate the opportunity you had to interview for the position. Think of the many applicants who didn’t make it that far. Make sure to let them know that you want to be considered for future openings. Sometimes the hiring manager’s first choice either backs out or doesn’t work out.

It’s always helpful if you can get some feedback on why you weren’t hired. If you made it through several interviews they certainly liked you but someone else was a better fit. The person hired may have interviewed better. Maybe he or she had experience that aligned more closely with what the hiring manager needed.

You may not get much information as most employers are concerned about litigation. But, it doesn’t hurt to ask. If you are lucky enough to receive feedback be grateful. Don’t make the mistake of being angry with the recruiter who tells you the employer felt your portfolio wasn’t creative enough. Thank him or her and try to take an objective look at your work.

Sometimes a dream job falls into your lap. Other times it’s the company you’re after. If your goal was to work for company ABC, or you decided that during the interview process, make sure to stay connected with that employer.

Finally, find out where they blog. You may find some of the people you met during the interview process blogging on LinkedIn. Read their posts and comment. The point is to get to know them. And, even better, let’s them get to know you too.

There’s a lot of competition for every position. And only one person can win the prize. Just remember, a no today may turn into a yes tomorrow.